Visitors from Rovereto
In October Dan Aspromonte hosted from Rovereto Sara Bozzi and her father Claudio and Fabio Bertolissi and his father Massimo. They traveled through California, Arizona and Nevada visiting several national parks and other sites along the way. 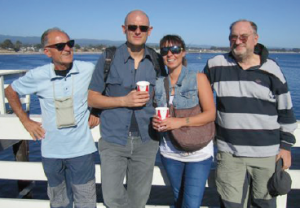 Noteworthy to us members of the Trentino diaspora is Fabio’s research on Trentino emigration. In 2009 he published a thesis at the Ca’ Foscari University of Venice on Trentino immigration to Bosnia, and then from Bosina to Agro Pontino, the former marshland south of Rome. The Trentino History Museum Foundation awarded him the year’s best thesis on Trentino
emigration. Vincenzo Mancuso from the same Foundation interviewed many of our club members last year, and snippets of those interviews will soon appear on television in Trentino. Most of emigration to Bosnia occurred 130 years ago from Aldeno, about 6 miles southwest of Trento, to Mahovljani. Why Bosnia? In part it was an effort by the Austro-Hungarian Empire to stem the rush of immigrants to the Americas. Fabio cites several reasons for Trentino immigration in that period of time: the international financial crisis; changes in political borders; flood disasters; diseases that devastated vines and mulberries (silk). The town of Aldeno, on the banks of the Adige River, was affected by all the above, but in particular by a calamitous flood in 1882. Most of those who settled in the Muslim-dominated Bosnia were poor farm laborers. They were given land to cultivate. They grew grapes and established a flourishing wine industry. On the cover of the July issue of the Trentini nel Mondo magazine, there is a photo of the monument that was recently erected in Mahovljani in honor of these immigrants. The story does not end here. In 1818, after WWI, Trentino was no longer part of the Austro- Hungarian Empire. Bosnia became part of Yugoslavia, and the Yugoslav government wanted these Trentini to serve in the military. Only a few had become citizens. They appealed for help, and in 1928 the Italian government granted them passports. In 1940 nearly the entire Trentino population of Mahovljani, about 100 families, sold their land and transferred to the marshlands of Agro Pontino, south of Rome. Mussolini had embarked on what he referred to as “the battle of the swamps.” With an army of workers he had these swamps drained, stripped of malaria and made into arable land. The Trentini, with origins in Aldeno, remained united, and many established noteworthy vineyards and wineries.
Some Trentini remained in Bosnia. The Province of Trentino is now providing them assistance in establishing productive vineyards and quality wines. In the future Fabio would like to trace Trentino involvement in the grape and wine industries of Brazil. In the meanwhile he is working on a project for the Trentino History Museum Foundation. He is researching the archives of Vallagarina to document migratory trends towards the end of the 19th century, mostly destined for Brazil. Rovereto and 16 other municipalities comprise the district of Vallagarina. Fabio offers his generous assistance to any of our members who are researching their ancestry in Vallagarina.

At our 40 th anniversary on May 14 th , we gave special recognition to the legacy members of the club; that is, those who have been members since the 1980s.

As earlier reported, the Circolo Trentino di San Francisco celebrated its 40 th anniversary
at the Prie Winery in Lodi on May 14 th , 2022.

This celebration was postponed 2 years due to the pandemic.
The owners of the winery welcomed just over 100 Trentini. Prie is one of the few wineries in the US that produces Marzemino, a typical wine from Trentino mentioned in Mozart’s opera, Don Giovanni. Each table featured this exquisite varietal plus other fine wines.

Michael Zampiceni played an array of Italian songs to keep us all entertained. After lunch our president Giuseppina Piasente Alvarez led a group of members in song, including the Hymn to Trentino (Inno al Trentino).

Our club prides itself in having members of all ages, young, not so young and in-between. This was in full display at the anniversary. There were two infants. Leonardo
Bonadiman was accompanied by his parents who recently moved to California. Little Nolan Holober was accompanied by his 95-year-old great-grandfather, Antonio Vitlacil, the oldest attendee.

Armando Maistri, President of the Trentini nel Mondo Association, and Mattia Gottardi,
representative of the Province of Trento, wrote letters to the club congratulating us on reaching this milestone.

We thank Trentini nel Mondo and the
Provincia autonoma di Trento - Pagina Ufficiale for their solidarity and kind words.

On Saturday May 14th we celebrated our 40th anniversary in Lodi. Here's a sneak peek of the event.

I dati del censimento 2020 in Trentino (in italiano)

Are you holding out till the last minute to decide whether to attend our anniversary event? If so, make the leap and RESERVE NOW! We need to let the winery and caterers know next week how many will be attending.

Remember attendees will receive a handsome Circolo Trentino mug. Each table will feature 3 Prie wines: a white Grenache Clair, a red Marzemino, typical of Trentino and either a Barbera or Nebbiolo. There will be an accordionist and singing, a short talk about our history, and ample time for socializing! There is plenty of parking, including convenient handicap spaces. There is a courtyard with games set up (Cornhole, Connect 4, Jenga, etc.) to keep youth and youth-at-heart entertained.

If you have questions, contact club board member Dan Aspromonte at info@trentinisanfrancisco.org.

Winery info:
The tasting room will be open from 12 to 4pm. Prie Winery specializes in unique European varietals, with most ranging in price from $23 to $35: www.priewinery.com/collection/wine. Tasting fee is $10 and includes 1 white and 4 reds. The tasting fee is waived if you buy at least one bottle or become a winery member.

Our passion is crafting elegant wines that express the best of Lodi and surrounding regions.
View on Facebook
·Share