Giacinto, aka Gino, Galliani
Gino Galliani, a founding member of our club in 1980, passed away on July 17th in San Jose. He was born in Lardaro in the Valle del Chiese, which is part of the Valli
Giudicarie. 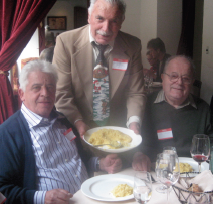 He was the first in his family to receive an education beyond high school. He had a promising career in the Italian forestry service, but his mother encouraged him to seek a life of greater opportunity with his 2 brothers in Canada. On the trip to
New York, he met Paula who was headed to LA. They stayed in touch and married in 1958. Soon later they had son Richard and daughter Aurelia, both residents of
the South Bay. At the young age of  37, Gino became a widower and had to raise the children on his own. Gino worked for Italian Swiss Colony, where he put to use training he received in Italy as an enologist. In the 1960s the winery was the second most visited tourist spot in California next to Disneyland. As we all recall, Gino was a talented speaker and loved to socialize.
So, he became a tour guide at the winery. In his off-time he worked fixing up
his real estate investments. Gino lived in Cloverdale for 50 years. He spent the last couple of years in Lardaro where he remodeled the house he inherited from his parents. Gino always brought cheerfulness and humor to our club events. His presence will be sorely missed. Our sincere condolences go out to Richard and Aurelia and their respective families.

Passing of Nadia Holober, Vice-Mayor of Millbrae
Nadia Holober passed away on May 8th at the age of 54 from a private battle with cancer.
Her parents, Antonio Vitlacil and Laura Floriani Vitlacil, immigrated from the Valsugana
to Canada, where Nadia was born. 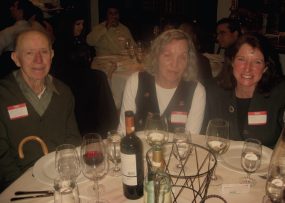 When Nadia was 4, the family moved to the Bay
Area. She graduated from the University of California Berkeley and the Hastings School
of Law. She was a firm believer in social justice and worked tirelessly for her local
community. In 1982 she met her husband, Richard Holober, while working on a political
campaign. They had two boys, Reuben, 25, and Evan, 21. In 1991 the family settled in Millbrae where Nadia volunteered to put on the city’s 50th anniversary.
She served on the city council from 1999 till her passing except for a 2-year gap
caused by term limits. From 2003- 04 she served as mayor. Accomplishments included Millbrae’s landmark new library, sister-city relationships with
Malta, Chile and China, the town’s acclaimed grease cogeneration plant and a balanced budget. Nadia was also a Eucharist minister at her church and an avid gardener. We send our heartfelt condolences to Nadia’s friends and relatives, and in particular to Antonio, Laura, Richard, Reuben, Evan and her siblings.

Kelly Kielar Sessi
Kelly Kielar Sessi passed away on May 3rd from a long battle with cancer. She was
delighted to witness her 2 oldest daughters get married last year. She also celebrated her
only grandchild’s first birthday and took her on a trip to Disneyland. Our club sends
profound condolences to her husband Martin Sessi, to their 4 children, Nicole, Kaitlin,
Kyler and Isabella, to their granddaughter Adrienna, and to all other family members.

At our 40 th anniversary on May 14 th , we gave special recognition to the legacy members of the club; that is, those who have been members since the 1980s.

As earlier reported, the Circolo Trentino di San Francisco celebrated its 40 th anniversary
at the Prie Winery in Lodi on May 14 th , 2022.

This celebration was postponed 2 years due to the pandemic.
The owners of the winery welcomed just over 100 Trentini. Prie is one of the few wineries in the US that produces Marzemino, a typical wine from Trentino mentioned in Mozart’s opera, Don Giovanni. Each table featured this exquisite varietal plus other fine wines.

Michael Zampiceni played an array of Italian songs to keep us all entertained. After lunch our president Giuseppina Piasente Alvarez led a group of members in song, including the Hymn to Trentino (Inno al Trentino).

Our club prides itself in having members of all ages, young, not so young and in-between. This was in full display at the anniversary. There were two infants. Leonardo
Bonadiman was accompanied by his parents who recently moved to California. Little Nolan Holober was accompanied by his 95-year-old great-grandfather, Antonio Vitlacil, the oldest attendee.

Armando Maistri, President of the Trentini nel Mondo Association, and Mattia Gottardi,
representative of the Province of Trento, wrote letters to the club congratulating us on reaching this milestone.

We thank Trentini nel Mondo and the
Provincia autonoma di Trento - Pagina Ufficiale for their solidarity and kind words.

On Saturday May 14th we celebrated our 40th anniversary in Lodi. Here's a sneak peek of the event.

I dati del censimento 2020 in Trentino (in italiano)

Are you holding out till the last minute to decide whether to attend our anniversary event? If so, make the leap and RESERVE NOW! We need to let the winery and caterers know next week how many will be attending.

Remember attendees will receive a handsome Circolo Trentino mug. Each table will feature 3 Prie wines: a white Grenache Clair, a red Marzemino, typical of Trentino and either a Barbera or Nebbiolo. There will be an accordionist and singing, a short talk about our history, and ample time for socializing! There is plenty of parking, including convenient handicap spaces. There is a courtyard with games set up (Cornhole, Connect 4, Jenga, etc.) to keep youth and youth-at-heart entertained.

If you have questions, contact club board member Dan Aspromonte at info@trentinisanfrancisco.org.

Winery info:
The tasting room will be open from 12 to 4pm. Prie Winery specializes in unique European varietals, with most ranging in price from $23 to $35: www.priewinery.com/collection/wine. Tasting fee is $10 and includes 1 white and 4 reds. The tasting fee is waived if you buy at least one bottle or become a winery member.

Our passion is crafting elegant wines that express the best of Lodi and surrounding regions.
View on Facebook
·Share