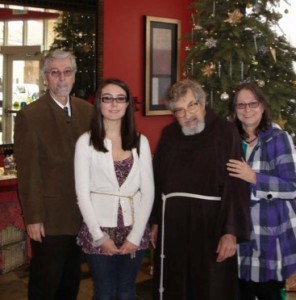 It was Boxing Day of 2010 and our family decided to take up Padre Efrem’s invitation to join him for lunch at his new home at Alma Via in San Francisco. The last two times we met at the events organized by the Trentini nel Mondo club, Padre Efrem expressed his desire to have someone publish the many poems he writes, and since I had just started playing around with creating web sites and blogs, it occurred to me that this might be a good medium for him to have the world read his poems. We will have to visit him again because by the end of our visit a friend had turned up to fix his printer and the poems took the back stage. We spent about three hours together and I went home feeling privileged to have spent some quality time with this great man. Although I can only speak for myself, I think that my husband Tarcisio (who incidentally is the Trentino in the family), and daughter Laura were also very touched by the time we spent with Padre Efrem. I am writing this short article in the hope that many of you will also take the time to visit Padre Efrem (he really does live for visits from his friends) in his new home. When we arrived we went to greet him in his room, number 10. It is a simple room where he has set up a desk with a computer and his books on one side and his musical instruments on the other. His bed serves as a table during the day. We spent a few moments there during which time I scanned through his poems in Italian, while Tarcisio looked at the poems in Trentino and Laura those in English. Some of the poems are quite touching, and all came straight from the heart. Unfortunately we had to leave to go to lunch before it got too late – at which point Padre Efrem picked up the panettone we had brought him and explained that someone had brought it to him today. We explained that it was we who had brought it and then he sadly told us about the problems he is having with short term memory due to his recent illness and that he is starting to worry that he might be in the early stages of Alzheimer. So we headed to the dining hall. I must say that next to the two retirement homes I am familiar with in Trento, Alma Via seems to be a paradise. It is really nice that guests can purchase tickets for lunch and be able to sit down and share a meal with the residents. It all makes assisted living so much more humane.The staff were extremely pleasant and not bothered at all that he had brought in three guests. Well as soon as we had ordered our food, Padre Efrem told us his story, at least the short version of it. It is amazing how the human memory works. Although he had trouble remembering our names his long term memories seem to be quite intact. I promised I would write it all down and share it with others. So here I am doing just that; I hope you enjoy reading this as much as I have enjoyed this brief visit with Padre Efrem. 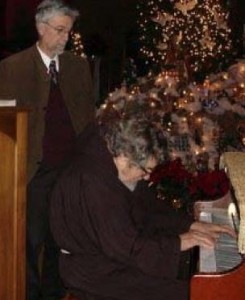 Maria Dellagiacoma “Accursio” and Andrea Trettel “Da Molin” in Predazzo, in the province of Trento. His baptism name is Mario Trettel. His mother was a native of Predazzo whilst his father was born in Tesero, only a few miles away. Mario was their second child with his elder sister born in 1919. Andrea Trettel was the son of a school teacher and he himself had also studied to be a teacher but preferred carpentry and had purchased his own workshop to build his life as a carpenter. It was a happy start to life, however life is unpredictable and tragedy soon hit this happy little family when a fire broke out in his workshop and destroyed everything that they owned. Penniless and in debt, the family moved to Caldonazzo where they spent the next three years in a two roomed home while the father was working on getting a full teaching credentials. After three years he got a full time teaching post in Trento and bought a “vecchio mulino”, an old windmill. He was now able to move his family from Caldonazzo to Trento. Moving to Trento and living in a small space, as all the family had to sleep in one room while his father restored the property to a home, Mario went to school there. These were hard times and one day Andrea met up with Mario who was returning home on his bike and asked him if he would go and stay with the Friars. In Padre Efrem’s words, in those days if your father asked you to do something, there really was nothing to do other than say “yes”. So within a matter of days, Mario was taken to the Friars in Vilazzano where he said “bye, bye” to his father and to the life he had known so far. In Caldonazzo he lived with about 60 other kids of whom only 5 or 6 became “frate”. Mario spent one year at Villazano and then went to Campo Maggiore, as he explained that this was towards the Adige going north, he noted that his memory was failing him and could not recall the name of the lake nearby.After three years at the Noviziate, the group of kids was now down to 9. It was war time he recalled, and many had been taken there because their dads had gone to war and there was no one to feed them. The rigors of a friar’s life were not, however, for everyone and most of them dropped out on the way. At this point he gave us more facts, but the sequence was a little hazy. Mario spent 3 years in high school in Rovereto while with the Friars (for those of you not familiar with the area that is 20km south of Trento), he then spent 4 years studying Theology in Trento and at the age of 24, in 1944 he celebrated his first mass. This was the beginning of his new life as a Franciscan missionary and in the Franciscan tradition he changed his name. He was now Padre Efrem. Padre Efrem spent one more year studying theology and then he was ready to take on whatever mission he was going to be sent to. His first year as a priest was spent in Arco, near Riva del Garda and he lived at the Noviziate while he helped out at the Arco parish. This was now the post war period and there were many needs throughout Italy. The Franciscan province, of which he was now a part had a need for someone to teach in Calabria, specifically in Tropea. I digress a moment here as I know Tropea well, having good friends there, this is an incredibly beautiful place with incredible beaches, I dare say that it is close to paradise – but even when I used to visit some 25 years ago there still was a lot of poverty in the area. After an evening out, it was common that a little kid under the age of 10 would ask you for some money because he or she had protected your car! So one can only imagine what this placewhich today lives off tourism was like in the post world war II era. 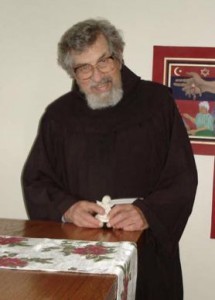 The Campana dei Caduti Foundation of Rovereto is changing its logo.

What will the Foundation's new symbol be?

You can help to decide! Go to:
www.fondazioneoperacampana.it/en/vote
to cast your vote.

You can vote for the new logo below. Voting will end on 30 September 2021 at 11.59 p.m. and we will unveil the winning logo on 4 October 2021, the 96th anniversary of the first tolling of Maria Dolens...
View on Facebook
·Share

5th Gold at the Tokyo Olympics - Trentino Ruggero Tita of Civezzano in sailing with crew member Caterina Banti of Rome.

Armando Maistri was voted unanimously the new president of the Trentini nel Mondo Association. He replaces Alberto Tafner who decided to step down after 12 years at the helm of the Association.

There is more information in the link: www.trentininelmondo.it/slider/201-armando-maistri-e-il-nuovo-presidente-della-trentini-nel-mondo... ... See MoreSee Less